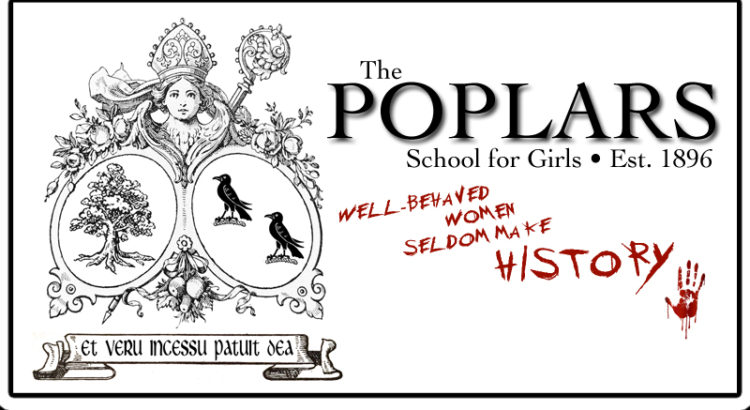 The Poplars School for Girls has been educating the daughters of the élite since 1896.  It’s a very selective establishment. Students self-select because, hey, all actions have consequences, and the consequence of certain actions is to find yourself, dazed, not really sure what-just-happened, being driven through the forbidding iron gates in the back of a black SUV.  What you don’t know at that point is, you’re never coming back.  At least, not as the regular, messed up, acting out, complete hellion version of you that ended up there in the first place.

Because The Poplars changes you.

Most girls melt down once they realize where they are, because, man-oh-man, the rules.  It takes you a week, two, to find your feet, but you can get used to anything in the end, right? Even those godawful uniforms.

Then, once you become used to the discipline, non-stop rain, emerald lawns, peacocks, giant backyard burial mound, colony of black cats, gravel paths, watchful crows, glittering lake, vigilant trees, hungry ghosts and the eccentric hens teaching an out-there curriculum inside the glorious old mansion, you can’t imagine finishing high school anywhere else.  Once you embrace being a Poplars Girl, you’ll be one for the rest of your life.  And Poplars Girls do NOT grow up to be those well-behaved women who seldom make history.

Not everyone loves it.  Some girls twist and shout against the constraints, proudly defiant. Others slink in the shadows, engineering workarounds, bypassing surveillance, trading contraband.  Still others shuffle through the grounds for two, three, four years, heads down, never belonging, always pretending.

And some girls disappear.  After an initial, cursory search in the forest, someone always comes up with a believable story to explain the disappearance and everyone moves on.  Despite the oh-so-convenient explanation (She ran away because she was pregnant! Because her parents couldn’t pay the fees! Because she was meeting a young man! Because she was depressed! Because she had committed a crime!), these missing girls are never heard from again – failing to contact families, lovers, friends in any of the years that follow – and they have a habit of vanishing from official transcripts over time.  It’s as if they never existed, not just forgotten, but deliberately wiped away.

For the first time, everything we know about The Poplars is collected in one place.

In the very near future, Poplars girls around the world will also be invited to share their memories and experiences of their time at the School.  But you have to earn that privilege, so sign up for the newsletter below and get commenting.  Come back and visit regularly – more secrets of The Poplars will be unfolding over time.

I hope you make it out alive.