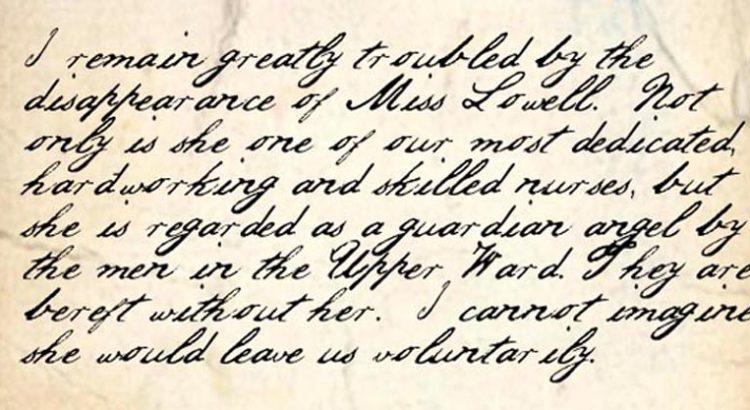 Dr. Isambard Jackson presided over The Poplars during the Civil War, when it was commandeered as a Field Hospital by the Confederacy.  His letters to his sister, Maria, contain two brief references to Clarissa Lowell, a volunteer nurse who vanished in the spring of 1864, during one of the most brutal months of the entire war for Virginia.

May 10th, 1864
“I remain greatly troubled by the disappearance of Miss Lowell.  Not only is she one of our most dedicated, hard-working and skilled nurses, but she is regarded as a guardian angel by the men in the Upper Ward. They are bereft without her.  I cannot imagine she would leave us voluntarily.”

May 27th, 1864
“I mentioned Miss Lowell to the Reverend Hayward at dinner last night, hoping in vain for news that she had been sighted in the village or even at the railway station. It would comfort me most profoundly to know, at this date, simply that dearest Clara may still be alive. His countenance darkened immediately. “The evil that men do lives long after we have interred their bones” quoth he, and refused to be drawn further on the matter.  As he was leaving, however, he told me Miss Lowell would have a special place in his prayers. It seems he may know some hint of what the slave women have been refusing to tell me regarding the most suspicious history of this house. I shall press him further on his next visit.”

Dr. Jackson died, from typhoid, two weeks after this second letter was written, and it is not known whether he ever spoke with the Reverend Hayward again.