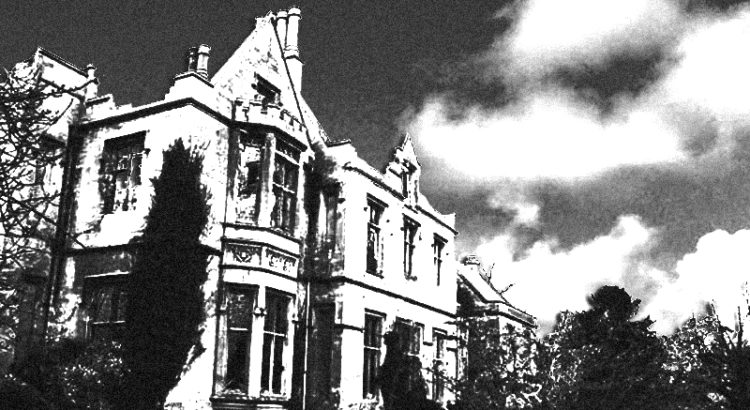 After the last soldier abandoned the hospital after the war The Poplars settled in on itself, a splintered staircase here, a broken floorboard there, a hanging patch of plaster overhead.  Mice came, and birds, insects, all the small creatures that like to nest, nibble and scratch: they took the house apart morsel by morsel, spattering what remained with guano.

No one went near the place.  Not even thieves.  The treasures of the Forbs family, their art, silverware, Louis XVI furniture, boxes of jewelry and, it was rumored, ancient African gold stolen by slave traders, remained untouched.  Supposedly, a toxic miasma saturated everything within the walls of The Poplars and clung to valuable objects even after they were removed from the house.  Burglars who ignored the warnings and tried their luck inside one moonless night would be found, a day or so later, their hands blackened and withered, wandering along a lonely road with no knowledge of how they came to be there.  The lucky ones died.  The rest disintegrated into insanity.  And, naturally, whatever they’d stolen was nowhere to be found unless you happened to look for it back in its original spot inside The Poplars, where it would sit, still covered in the dust of years’ neglect, as if it had never been moved.

Effie Wright grew up on a small farm out along the turnpike road.  She was a good girl, obedient, with a joyful streak. The youngest of her Pa’s eight surviving, everybody’s pet, she could charm the birds out of the trees.  She dreamed one day she’d learn how to use a typewriter and go live in New York, where she’d wear a silk blouse to the office, and, on Sundays take walks with a parasol in Central Park. Like all the local children, she knew never to wander in the woods alone when picking berries. She knew to stay away from the old plantation house and grounds. Effie’s Pa, along with all the others in the district, scared his daughter and her brothers to sleep with tales of the evil that still lurked within The Poplars, the lights still shining faintly in the attic, the laughter still drifting from the broken windows on a quiet summer’s night.

Effie was a couple of weeks shy of her thirteenth birthday when, one Friday in late spring, she didn’t return home for supper.

When it got too late in the evening for her to be dawdling, distracted by a butterfly, or playing hide and seek with her friends down by the river, when the dusk turned to solid, remorseless dark, the extended Wright family and all their neighbors and their extended families took lanterns and dogs and began the search.  By instinct, they all headed in roughly the same direction, shouting Effie’s name as they trampled through the ancient woodland to the West.  The search parties thrashed through the undergrowth for hours until they converged just before dawn, at the grand front entrance of the old plantation house.

There, Effie’s Pa found a single shoe, lying on the top step.  He recognized it immediately — he’d worn the shoe and its pair for a few months himself before passing them down to his daughter.  She stuffed old newspapers into the toes and they fit her just fine.  The last time he’d laid eyes on this shoe, however, the leather had been scuffed to a light sandy brown, not stained dark red, damp.

Disregarding the legends of toxic miasma, the extended Wright family and all their neighbors and their extended families hefted their lanterns, hammered at the chain that held the door until it came loose, and continued their search inside. They found no trace of Effie Wright nor any sign that anyone else had moved through the building.  Theirs were the first and only footprints in the thick, drifting dust.

While searching for the lost girl, the older folks recollected the stories they once knew about this house, tales of the Forbs family before the war, their dealings with the Devil.  About Edgar, who vanished into thin air one night, leaving his half-sister Mercy to run the place before she lost what remained of her mind.  Hadn’t there been other missing girls way back then, they whispered, when Edgar was still snapping his cat o’nine over the back of any slave who irked him?  Their remembrances of the old days pooled and coalesced, turned into anger, fear, the memory of unholy betrayal, the spilling of innocent blood.

Once they were sure they wouldn’t see Effie again in this life, the searchers gathered outside.  In the morning sun the eyes of both men and women were hard, reddened, unforgiving, mainly of themselves.  They’d failed one little girl.  They didn’t want to fail again.

There’s no record of who lit the match and tossed it through one of the broken windows before they all drifted back into the forest, retreating into their daily chores.  In truth, there must have been several lit matches, tossed in at well-placed intervals, because The Poplars burned steadily until around noon when a heavy downpour extinguished the flames. All that was left was a shell.